How do subscription companies in EU differ from those in the USA?

This week, we keep it going on the ProfitWell Report by looking at how another SaaS ecosystem compares to the United States. Chris Heron from Visibly asks us: How do subscription companies in Europe differ from their counterparts in the United States?

Subscription and SaaS ecosystems have popped up–and flourished–everywhere in the past few decades. While the United States continues to dominate when it comes to the subscription economy, Europe in particular is enjoying an upswing in the past few years spurred by the ecosystem getting injected with talent coming from the European headquarters of U.S. tech companies.

The problem is, looking at Europe as one block is a bit tough.

The U.K., Western Europe, Eastern Europe, and Scandinavia all act a bit differently, particularly in what they prioritize within their companies. For instance, Eastern European companies tend to be very efficient and resourceful, a result of dealing with older equipment in the post-Soviet era, while the Nordics are very much focused on design and experience.


You see these differences pop up when comparing net promoter scores, a measure of customer satisfaction. Note that while NPS has gone down across the board, U.K. NPS tracks essentially spot on with U.S. NPS, Northern European subscription companies tend to see 20% higher NPS, and Eastern European companies see 15% lower NPS. 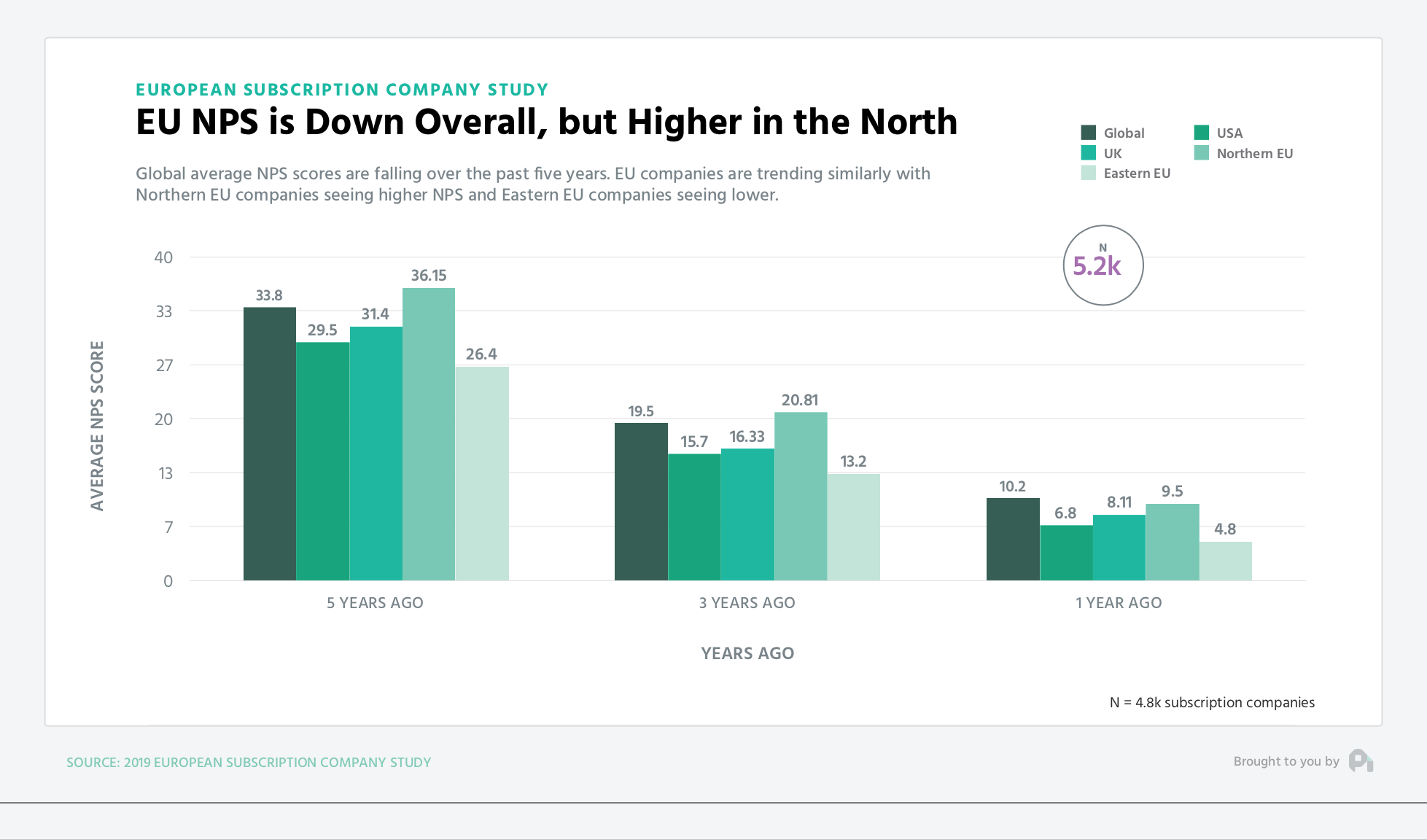 You see a similar relationship when comparing retention numbers as well. Gross revenue retention across Europe is actually much worse than subscription companies in the United States, with Eastern European companies seeing roughly 25% higher churn, the Nordics and Western Europe seeing roughly 15% higher churn, and the U.K. tracking at about 5 to 10% higher than their U.S. counterparts. 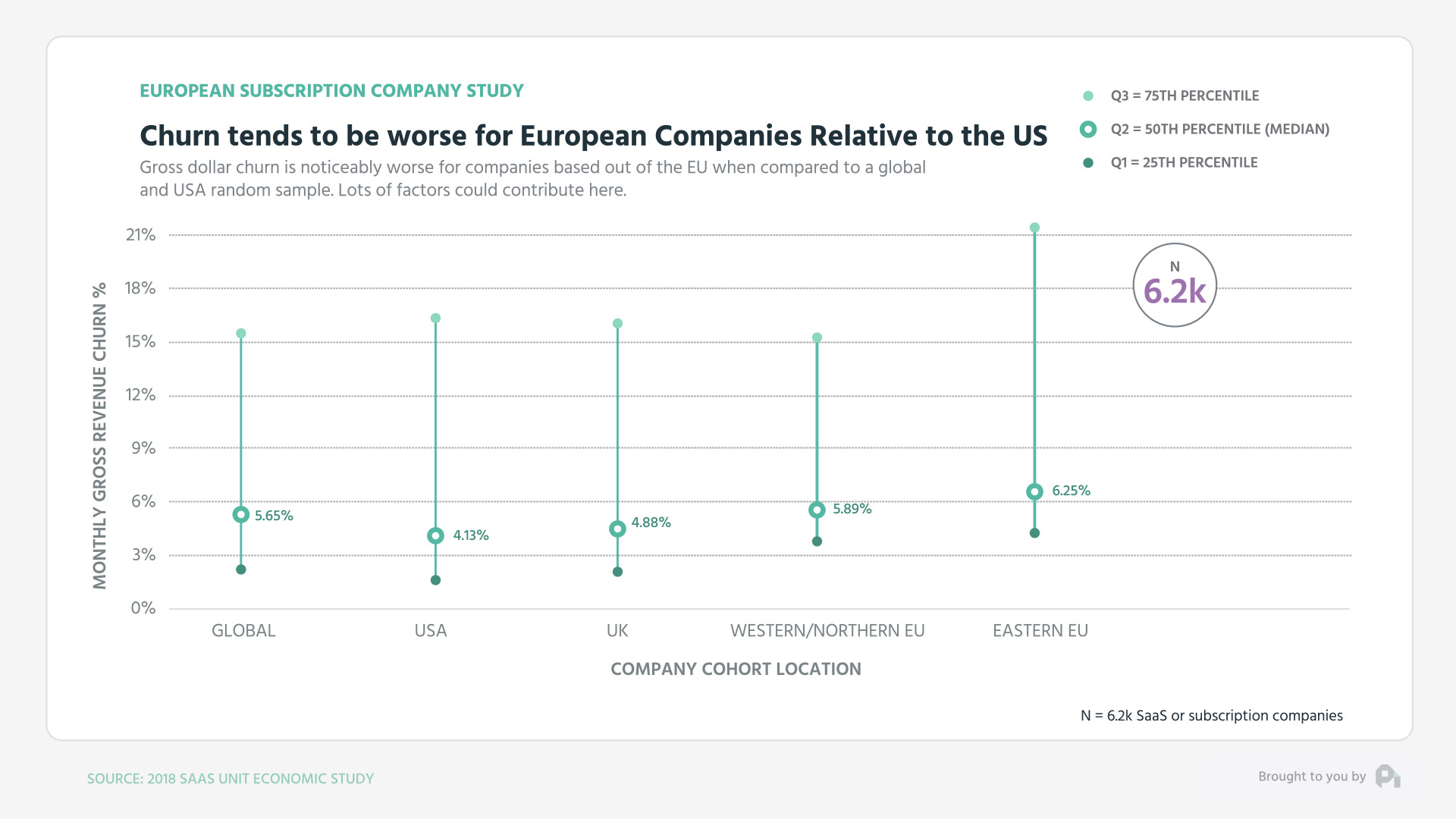 Further, the differences also exist when looking at the growth of company average revenue per user, which is an individualized proxy for how good or bad a company is at extracting value from their target customer base. Note that across the board, ARPU remains relatively flat, with the U.K., Nordics, and Western Europe seeing some gains, but they’re very minimal, and Eastern Europe actually seeing their collective ARPU decrease over time. 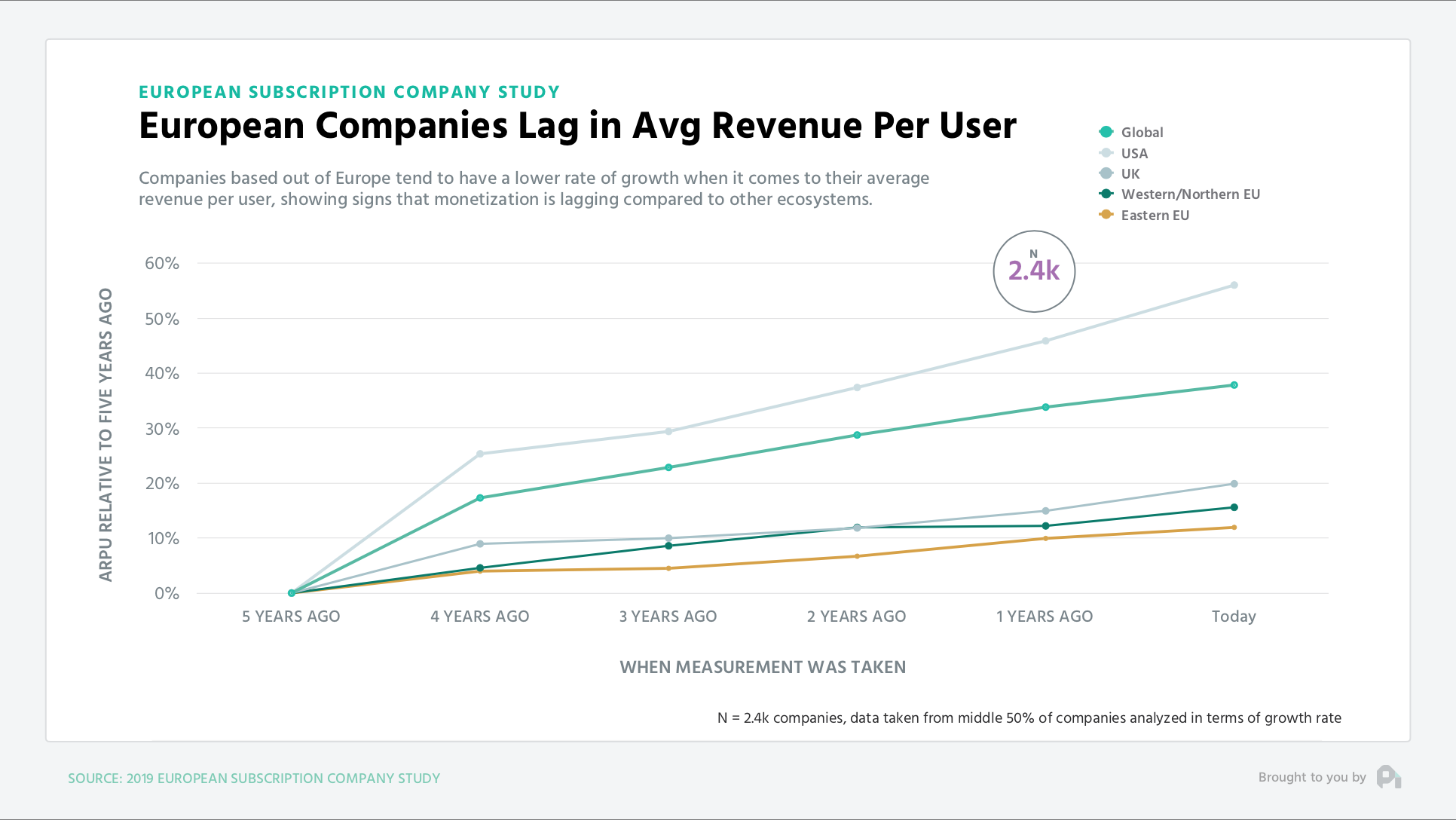 
Sure, the internet reduces those barriers considerably, but the talent gap is where the impact truly exists. With time this will continue to close and I’m sure these numbers will look much cleaner as we continue to march into the adolescence of the subscription economy.


That's it for this week. If you have a question or an idea for what we should feature next on the ProfitWell Report, send it to me at neel@profitwell.com. If you got value here or on any other week of the report, we appreciate any and all shares on Twitter and LinkedIn. That’s how we measure if we should keeping doing this or not. We’ll see you next week.