The way we think about productivity is wrong (at least that's what Bradley Scott thinks). Andela's VP of Technology Product joined us at Recur 2018 to talk about how we need to rethink productivity to position it as a way to help companies find a path to sustainable growth.

We all know that tracking productivity is a valuable KPI. It not only helps us see how efficiently our teams move from idea to finished product, it helps identify areas for improvement. But how many of us are actually measuring it correctly?

The traditional model measures the output of a team and how teams move through each process to achieve the intended output. But, as Bradley puts it, output does not equal productivity. We should be measuring for outcome instead.

To do this, we need to solve for engineering efficiency, transparent prioritization, and global optimization. Now, Bradley comes from the world of engineering, so if you want to widen the scope, you can think about it as operational efficiency or process efficiency as well.

When you're deciding on what metrics and numbers to use to measure productivity, it's important to think about how those KPIs drive the behaviors you want to see in the team. Good behaviors result in better outcomes and help you maintain velocity without losing quality.

Bradley framed this idea around how their team thinks about their sprints, specifically their switch from one-week to two-week sprint planning. 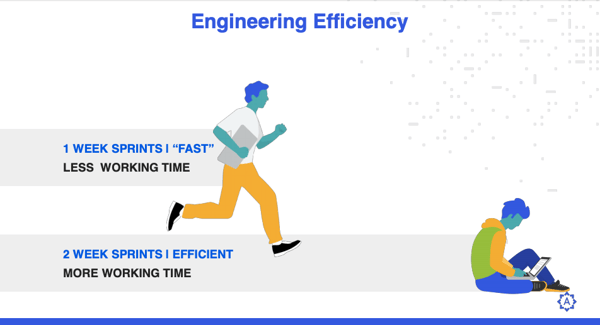 We all want to move really fast. At Andela, they were working with one-week sprints, which meant their team was releasing new features every week. The goal at the end of each sprint was a shippable, deliverable, usable piece of product, something that Andela could give to their customers—but that speed didn't always mean efficiency.

In a one-week sprint, there are only really three days of actual work time; moving to a two-week sprint bumped that up to eight.

“We still have that same one day of QA and shipping and deployment at the end, but now we have eight days in the middle of engineering time, heads-down coding time.”

But why does that matter? When you're thinking about how to boost productivity for sustainable growth, eight days of engineering time is much better than three days. But it's bigger than that. The switch to a two-week sprint gave Bradley and his team a way to solidify the kind of behaviors they wanted to see in the engineering team.

With a two-week sprint, the Andela team was able to perform better on the whole. They were still committing code every day and working through QA and releases in the same way but at a much lower risk. The decreased risk and increased actual working time helped the team at Andela boost their engineering efficiency, leading their team to be more productive.

Transparent prioritization ensures everyone is on the same page

Prioritization is vitally important for productivity. Your business priorities and goals need to be understood by the entire organization at all times. Everyone needs to be aligned with these goals so that they're achieving the strategic objectives of your company. Ensuring that prioritization is transparent lets your team build their operational efficiency toward a shared outcome.

If you prioritize in a vacuum, it doesn't give your team the context they need to understand the impact of their individual work on the goals of the company, and that always leads to disaster. 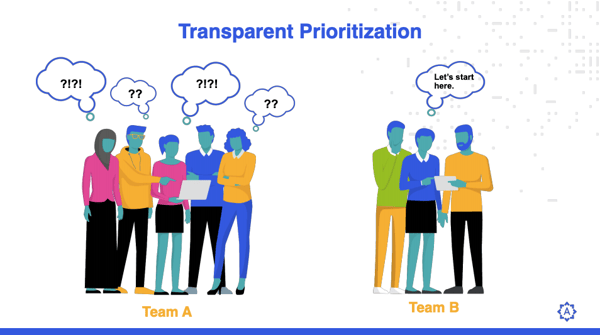 Team A is obviously confused; they don't know the best path to proceed. Team B has a designated starting point on which to build their plan.

"If employees don't feel connected to the work that they're doing, or why it matters, and what the differences between delivering something a week late versus a week early, if they can't monetize that or think about that in the context of your business goals, you're leaving a lot of productivity on the table."

This all goes back to driving the right behaviors. You want people to work together in a way that's intrinsically committed to the performance and success of the business. Understanding the real ties between their work on a daily basis and their impact on this success is only possible through transparency.

When you're not prioritizing things openly and communicating that priority to the team, it breaks all sorts of processes. You'll duplicate work, set up unnecessary blockers, and miss important deadlines. All of this leads to a less productive team.

At this point, Bradley's makes two really great points: Efficiency isn't speed, and priority needs to be transparent. Executing on those two ideas alone can help your team boost productivity—but there's one more thing you need to consider: global optimization.

Global optimization gives you access to the best talent possible

The future of work is distributed. Global optimization is a way to frame your thinking about what the company will look like with remote employees who are spread across geographic locations. If you limit your employee pool to just those people who can make it into the office every day, you're bypassing a huge opportunity.

As Bradley put it, remote and work-from-home options should be table stakes at this point. It's a well-established fact that remote work sees an insane boost in productivity.

If you're not planning to move toward this model in the future, you're going to fall behind.

"We practice a philosophy where if one person is remote, one person is distributed, then we're all distributed. That gives the people who are overseas or out of the office the exact same experience as anyone locally."

The hardest part about this is getting the entire company bought into these principles. There's a distinct change in behavior when taking a company to a place where they are comfortably distributed. But when that happens, everyone involved can see the same kind of productivity boosts.

Being able to tap into a global talent pool ultimately makes the business that much better. Instead of fighting for the same group of people who happen to live in Boston, you will be able to fill positions faster with awesome candidates from London, or Kenya, or Austin. This gives back time that can be better spent optimizing internal processes for productivity.

Output does not equal productivity

Your KPIs shouldn't be measured only on how much work is being done, but the quality of that work and how it affects the company's bottom line. Solve for outcomes, not output.

Think about how these KPIs drive the right kind of behaviors for your team and how they'll contribute to the overall success of your company.

When you focus on boosting engineering efficiency, adopting transparent prioritization, and thinking about global optimization, it helps your team frame productivity that builds to sustainable business growth.