Kanye's love for Kanye proves the power of personal brand

In this episode of Tradeoffs, Hiten and I take a break from talking about software products to dig into one of today’s most controversial rappers: Kanye West. That may sound a bit strange for a product-focused show, but the impact of Kanye’s music and personality on the world around him is an interesting example of how powerful personal brand really is. And with a successful musical career, fashion company, and design studio, Kanye definitely knows how to leverage that brand effectively.

We spoke to 209 people about their feelings towards Kanye and his music and some interesting themes popped up. While Kanye doesn’t have product-market fit, and his NPS score is really low, hardcore fans are still really invested in both his music and his personality. This goes to show how creativity, as well as controversy, play an integral part in the evolution and popularity of a creative brand.

We surveyed 209 fans and found that Kanye doesn’t have product-market fit. But maybe that’s okay. If you’re a creative artist or a software product, trying to please everyone in the market 100% of the time will only lead to issues as your company grows. Early in his career, it seemed like Kanye was trying to do just that, but now he’s doubling down on being authentically himself. And while it seems to be working, he definitely loses out on a wide segment of the market as a result.

When we asked, "How disappointed would you be if you couldn’t listen to Kanye West’s music?", only 19% said they would be very disappointed. This means that Kanye doesn’t reach the 40% threshold needed to say he has product-market fit.

While that result might be worrying for a SaaS company, it’s not all that surprising for such a controversial public figure. What’s more interesting is that only 39% said they would be somewhat disappointed, leaving 42% of survey respondents saying they wouldn’t be disappointed at all. If we think about all the reasons someone could dislike Kanye West — his music, his outspoken politics, his brash personality, his actions towards other popular artists — he makes it easy for people to dislike him. But no one can say he’s not true to himself, which is arguably more beneficial to Kanye’s brand than placating to a wider audience.

And even without product-market fit, the feedback we received when asking Why would people be very disappointed if they could no longer listen to Kanye West? shows just how little product-market fit may matter.

The qualitative feedback was even more telling:

Kanye’s fans recognize that he’s a bit ridiculous, but it doesn’t impact how they feel about his brand. He has such strong brand affinity that people buy into the idea that he’s a genius. Let’s talk about the word genius. Kanye often refers to himself as a genius, or a god, which has a direct impact on how fans talk about his music. He’s priming the audience with language to use when talking about the Kanye brand. That’s personal marketing at its best.

From a product perspective, one idea rises to the surface — despite the controversies, or maybe as a result of them, people have powerful feelings about Kanye’s products. These feelings are so strong that he has the freedom to try new things without risking the alienation of his core fanbase.

The evolution of a personal brand risks relevancy and popularity

“It's very rare that wide artist remains an artist for a long time. Every artist that has had a career for more than ten years has reinvented themselves several times.”

Defining your value proposition as a personal brand isn’t easy. If the focus is too much on keeping current fans happy, that will probably lead to a dip in creativity or stagnation in a product. For Kanye, the journey from being a producer to being a rapper required moving away from a mainstream style toward something uniquely his own. Though this authenticity has defined his brand, it also made it more difficult to maintain his popularity. Combine that with the controversies and public missteps and we see a narrowing of Kanye’s core fanbase.

To look at what people feel is Kanye’s core value proposition, we asked What is the primary benefit that you have received from Kanye West?

I think it’s interesting to see that the entertainment aspects of Kanye West aren’t tied to his music alone. His personality and antics are something that fans want to see. What’s even more interesting is the 9% that said they were motivated/inspired by Kanye. His authenticity, while actively turning away some fans and potential fans, is a part of why others love his brand. And that’s the tradeoff — being 100% Kanye, 100% of the time earns admiration from some people and outright hate from others.

You see the impact of this in his NPS score, which is an abysmally low -26.

While Kanye is supported by a core fanbase who actively seek out anything he creates, there are significantly more detractors than promoters of his personal brand. This likely has an impact on how often people listen to his music, which we asked as well.

Only 6% of the 209 people who we spoke to listen to Kanye every day. Consider these people his ride or die fans. The vast majority of people only listen once or a few times per month. Still 117 of survey respondents would recommend Kanye West.

Kanye’s music, while not for everyone, is not just worth talking about, but worth sharing with friends. This is a fact that’s supported by not only Kanye’s core fanbase, but a segment of his detractors as well.

His personality, his evolution as an artist, and his outspoken personality all work together to make Kanye West an engaging artist for even people who dislike one or more aspects of his brand. This elevates his position in the market despite low product-market fit and NPS scores — and it speaks to his ability to transcend the inherent dislike of detractors.

While there isn’t a one-to-one example in the SaaS world, you see similar themes in value-based products like TOMS or Bombas socks. Mission and personality work in tandem with the actual products to form a picture in consumers’ minds of what the company should be. Any issues in one area will have a direct and lasting impact on all other aspects of their brand.

The artist cannot be separated from their public persona

A lot of the issues that cropped up during our survey had nothing to do with Kanye’s music and everything to do with his personality. Kanye gets a lot of heat from fans for the people and ideas he supports, and those feelings are the deciding factors for how his overall brand can be improved.

When we asked "How can Kanye West be improved to better meet your needs?", the most popular response was “improve his public relations.” 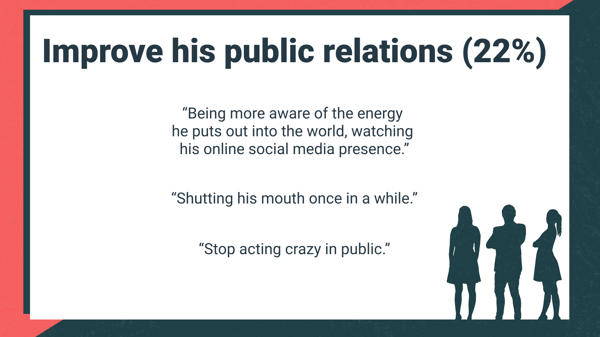 The feedback for this question was pretty aggressive across the board.

Most of Kanye’s fans just want him to stick to creating the products they love. And while it might seem that all of this adds up to a pretty negative impression of Kanye West, a big part of his shtick at this point is being a controversial figure.

“If we believe that all press is good press, then do we really think Kanye should improve his public relations? Or should he just keep doing what he’s doing?”

We’re in this interesting situation where perception of Kanye’s personality may or may not work against him. And there isn’t really a direct correlation for SaaS products. Ask yourself, outside of something you have to use for work, is there a product you would recommend that you actively dislike?

Kanye has doubled down on a specific persona and, for better or worse, that seems like it’s not going to change. Every decision Kanye makes has a direct impact on his audience and can turn a promoter into a detractor or vice versa. So, is it really all that bad that he’s positioned himself in such a way that his personality is a part of the product now? We’d argue that this is how it should be for a personal brand, where product and persona are fundamentally inseparable.

Are Kanye’s products stronger than his personality?

Kanye West has evolved a lot over the past fifteen years of making music, both in his style and his public persona. Instead of just a producer and a rapper, Kanye is now a fashion mogul, the owner of a design/production house, and a member of one of the most famous families on the planet. If we extrapolate from here, his interests and products will continue to diversify over time.

As a personal brand, it’s important to maintain a strong fanbase to support this kind of growth, but as Kanye continues to grow, will his narrowing fanbase eventually reach a point where it doesn’t matter?

Tell us what you think! He’s definitely a controversial study in a meteoric rise to fame, so where do you think he needs help?