How quickly are features losing value?

To support this notion and answer the question, we looked at over 1.2 million different subscription consumers. Here’s what we found.

As to not bury the lede – the products we’re producing are losing their value at an alarming rate. Twenty years ago if you gave someone a database with a login screen, you were kind of a god. Today, if the product doesn’t have good design and great support, people aren’t really that interested. As such, you need to actively work to create a better product to keep up.


To dig deeper here, we put together a composite study where we measured willingness to pay using our Price Intelligently software of different products over the past six years. We normalized the data by grouping the core features of these products and the data from traditional add-ons or differentiable features. 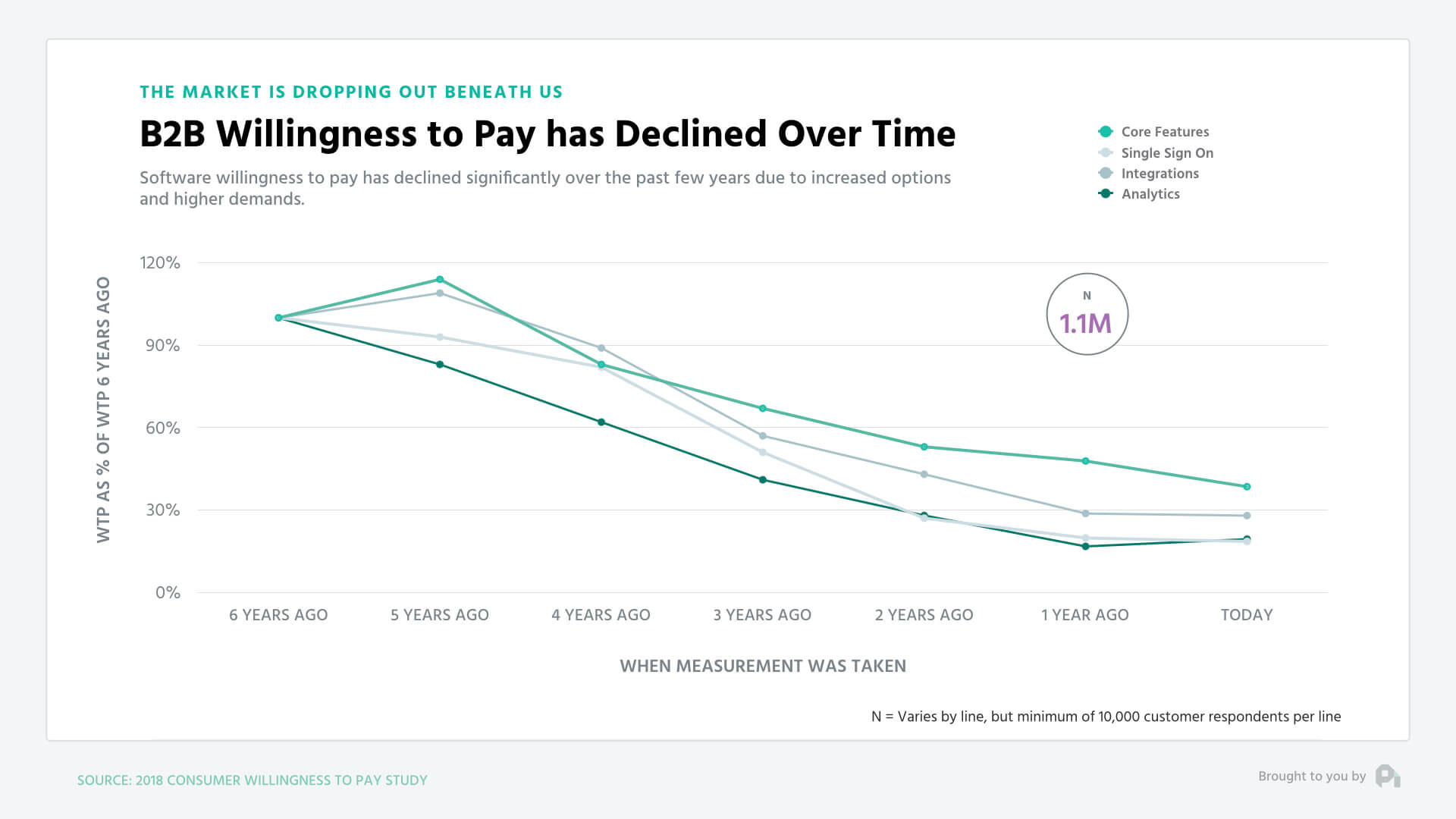 In the world of B2B software, core features, as well as traditional add-ons and differentiable features like single sign-on, included analytics, and the like have lost anywhere from 60 to 80% of their value in the eyes of consumers the last six years.

In the world of B2C, which includes media, entertainment, education, fitness, and subscription e-commerce products, value has also declined, but interestingly enough not at the same rate. Over the same six year period value has dropped in the aggregate anywhere from 40 to 70%. Yes, it’s still a lot, but not as much as the world of B2B and this is likely attributed to the consumer market getting hammered in traditional retail and only the best of the best coming online. Of course, many other lurking variables exist.


The question remains though: How quickly do actual features and functionality move to a place of low value?

To study this, we need to teach about a model of value that we developed here at ProfitWell. For any product, doesn’t matter if you’re a cup of coffee or an enterprise piece of software, there are two axes of value: the features of that product — so for a cup of coffee this would be the taste, the temperature, the country of origin, etc. — and then the willingness to pay (WTP) for that product.

We can plot those preferences on a nice two by two using methodologies we’ve developed. We can survey the entire ProfitWell Report audience and find out that most of you, not all of you, but most care about the taste of coffee above everything else. You’re indifferent about temperature and your least value feature is the country of origin. When we compare that data to WTP information, we can find out that those of you who care about taste are willing to pay roughly 30% more and those of you who care about country of origin (there aren’t a lot of you) are willing to pay 40% more.

To bring this back to the general point, if we find a feature that the majority of people value and those that value the feature have a higher WTP, then that feature is a differentiable feature. A feature that is not valued as much by the group, but those that do value the feature have a higher WTP, gives us an add-on. Features that are highly valued, but have low WTP, give us a core feature. Features that are low value and low WTP are trash. 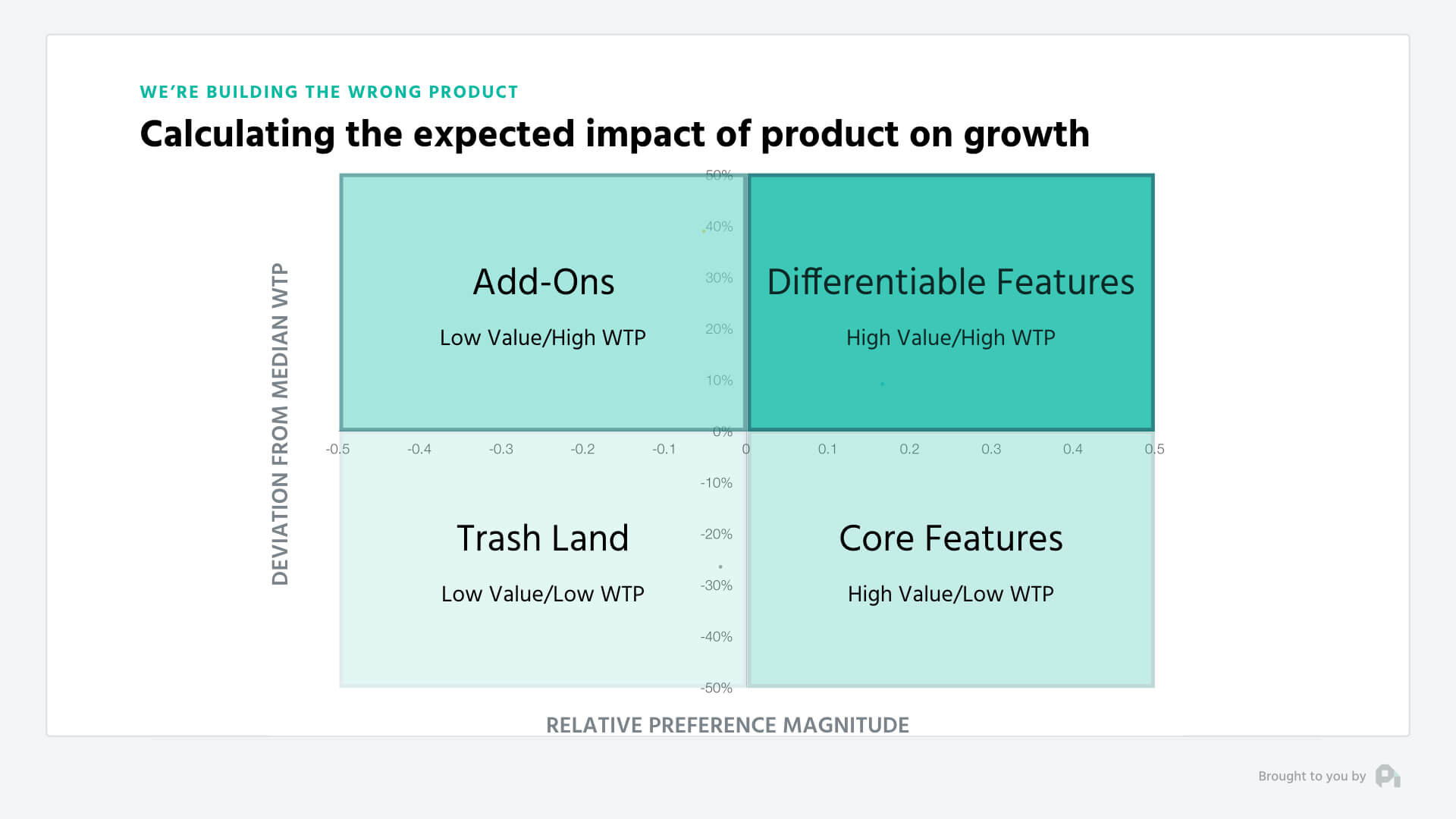 We collected data from 1.2 million different subscription consumers and found that five years ago, this is how features moved within these quadrants. Add-ons and differentiable features would slowly move to core features and they moved between quadrants at a rate of eight to ten years. This is why we were able to focus our product efforts on speed, because we would build things that would retain some of their relative value for quite some time, even if we weren’t building the best features.

Why is this happening? Well, think about where we are in the lifecycle of products. The magic has worn off, so customers demand more for less. There are certainly aspects of our products that retain their value and don’t move within these quadrants, but our job as product leaders and operators is to make sure we’re finding where that true value is going to exist for our customers and understanding that we’re going to need to build at a high rate pretty consistently to stay competitive in the market. After all, there’s no better secret to success in the market than knowing your customer and building to give them an enormous amount of value.


Well, that's all for now. If you have a question, ship me an email or video to neel@profitwell.com and if you got value here or on any other week of the report, we appreciate any and all shares on Twitter and LinkedIn. That’s how we measure if we should keeping doing this or not. We’ll see you next week.