Why you need a compass metric for hyper SaaS growth

In the startup world, we all have growth numbers that we want to hit—that’s not the hard part. The hard part is actually achieving growth, which is a “bewilderingly multifarious problem” in the words of Paul Graham, famed investor and co-founder of Y Combinator.

Unfortunately though, what we're continually finding with SaaS companies we speak with is most folks are simply setting a target (which is a great first step) and then just throwing a lot of things against the wall and hoping things pan out by the end of the quarter (very not good). Put simply, companies big and small lack any true accountability behind their growth process and progress. 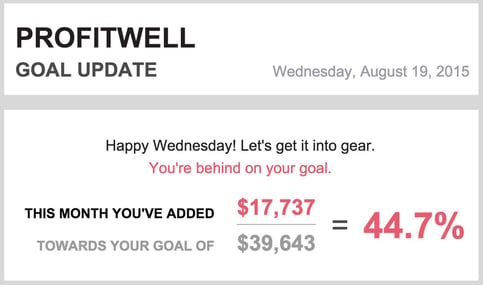 At Shopify—which recently had a billion-dollar IPO—they run an acountability cadence so phenomenally simple that it's incredible more companies don't follow their lead. Every week they: 1. send out an email tracking their compass metric and 2. hold a meeting. That's it.

Yet, behind this simple framework lies some fundamental ideas about how to run a company and empower your team to rally around one particular compass metric. Let's explore how you can set this growth cadence up in your business, before walking through why this process is so powerful. All of which well help us implement what Shopify CEO Tobi Lutke explain, "The motor of a fast-growing multi-million dollar business."

You need heirarchy and focus in your analytics

In a world filled with analytics software, there are literally hundreds of metrics you can track and work to optimize. Yet, just because you can measure and track, doesn't mean you should measure and track. Most business intelligence products make this mistake by taking a bunch of your data and turning it into a bunch of graphs. This laundry list isn't intelligent and becomes debilitating because you end up dividing your effort equally amongst metrics that aren't equal in impact or importance. You're also pushing your team in a multitude of directions, because not everyone is rallying around a single fulcrum to optimize.

In SaaS, you're constantly battling time and you can't afford to fall prey to analysis paralysis when the clock is continually ticking against you.

"In SaaS, you're constantly battling time and you can't afford to drown in too many metrics."

Your metrics need heirarchy and focus. Focusing on one number turns your entire company into an optimization problem focused on moving that single number, rallying your team and crystallizing where you need to spend your time. As Graham puts it, "Focusing on hitting a growth rate reduces the otherwise bewilderingly multifarious problem of starting a startup to a single problem...if you get growth, everything else tends to fall into place"

Choosing your compass metric - the number, rate, and interval

Great; so what should this compass metric look like? Well, setting the right metric comes down to: 1. choosing the focus, 2. setting your optimization goal, 3. and establishing your measurment interval.

While this may seem like a straightforward part of the process, optimizing any metric has tradeoffs, because you only have so much time and resources. For example, focusing on retention may mean you divert resources from net-new acquisiton (or vis versa). This means you need to carefully consider where you're going to center your efforts.

Typically in an earlier stage company, you're going to focus on growth (either in active users or Monthly Recurring Revenue (MRR)). In mid to later stage companies you'll likely still focus on growth, but you may drill down a bit to focus on Lifetime Value (LTV) or MRR Churn. The latter two are much harder to rally an entire team around, as they're typically managed by specific parts of the company. Yet, the important concept here is to make sure you're fulfilling the tenets of focus and tracking something that can rally your team as a whole.

Once you have your number, you need to realistically determine how much you want to move the needle. Earlier stage startups may be looking for 5-7% week over week growth, whereas a later stage company may set an agreesive goal for 3% month over month growth. The important idea to remember here is that you want to be aggressive in your rate to push your team, but not too aggressive in a manner that deflates moral because the goal is unattainable.

Similar to your goal setting, your measurement interval will vary depending on your stage. Typically early stage companies want to track week over week numbers, because the frequency at which they're making changes needs to be much higher. Mid to late stage companies will start to look at things on a monthly or quarterly cycle. Just remember to make sure there's an exact deadline. Team's need this to maintain a healthy sense of urgency as well as to put a stake in the ground for evaluating past performance.

Setting your compass metric is only a tenth of the battle; the rest of the fight comes in making sure you have transparency around this metric that permeates to every person in the company. After all, your goal should be to empower your team to act without the need for micromanagement.

"Your goal with goals should be to empower your team to act without the need for micromanagement."

Every single person who has an impact on your compass metric should be getting fequent updates on how the company is progressing on their compass metric goal. The reason this is so important is that your team members on the front lines have the highest impact on whether or not you're going to hit your goals. After all, they're the folks doing the actual work to advance the company.

Data supports this notion, as well. In a recent study we conducted amongst SaaS companies, we found that those companies sharing their financial progress with their team were growing 34% quicker than those who didn't. Teams appreciate this information, as well. We see 60%+ open rates on our goal progress notififcations in ProfitWell, indicating that teams want to be engaged and focused on these metrics.

Beyond instilling transparency throughout your company, these daily emails also prompt your team to take a deeper dive into your metrics. Growth (in terms of MRR) has many parts and can be influenced by a number of factors - new customers, upgrades, downgrades, churn, etc. All four of these fators are fulcrums through which your team can influence growth. As such, giving them a prompt to explore why growth is lagging allows your team to identify where underlying problems exist to formulate solutions to improve growth overall.

To summarize, you can't afford to simply avoid any uncomfortable reailties. We don't want bad news, but only by surfacing any potential issues as soon as possible are we able to learn and act. We see time and time again, companies that simply ignore their metrics will fail, while those who push their metrics to the forefront of their organization succeeed.

Weekly meetings: Get organized to act

Even with complete transparency, there are some underlying issues that will require some more planning and accountability. A weekly meeting in the context of your progress allows your team to constantly stay abreast of learnings from the previous week, as well as holding everyone to their word on how they're going to contribute to improving the metric during the following week.

Remember that no successful company became successful through the work of a single individual. When it comes to your compass metric, all hands on deck ensures you're not missing anything, but you're also prioritizing the best ideas upon which you'll execute. These weekly meetings center your team on your mission, providing an additional touch point to stay organized and accountable.

Your compass metric cadence intentionally should become repetitive and constantly top of mind for every person throughout your organization. Yet, your priorities, goal rate, and even your measurement interval should evolve to contstantly fit your company's needs. After all, hopefully you grow to the point that 5% month over month growth feels insane and unrealistic.

The important concept to keep in mind though is you want to keep your compass metric focused and open to your entire team. This is the only way to ensure you're making accountability and high standards an ingrained part of your company culture.