how do Bay Area companies compare to those outside it?

On our season four wrap, Sameen Karim, co-founder and CEO of Eventable, is curious to see how companies in the Bay Area compare to those outside of it. Is there a difference in growth, or in retention?

To answer, we looked at the growth data from just over 3k companies from all over the world.

After spending a ton of time in the Bay Area over the past few years, and having offices in both Boston and Rosario, Argentina, I’ve learned that us operators outside of Silicon Valley love to compare our ecosystems to the Bay Area, but no one in the Bay Area is comparing themselves to Boston, New York, London, or any of the other ecosystems out there.

Silicon Valley is the Mecca after all, so comparisons probably just don’t make much sense.

Yet, as costs of living increase substantially in Silicon Valley, more operators are getting fed up and moving on, which may be a mistake when it comes to growth.

When looking at the journey from $1M to $10M, those companies across different average revenues per user based in the bay area have growth rates anywhere from 15 to 26% higher compared to those companies outside the Bay Area. 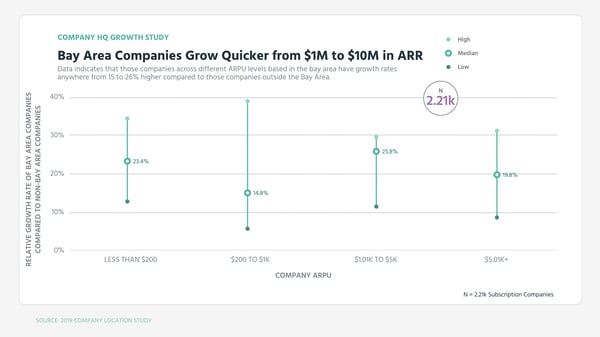 Note though that these gains don’t seem to correlate with the size of the customer though, meaning it’s not as if SMB focused companies are better than enterprise companies in the region. 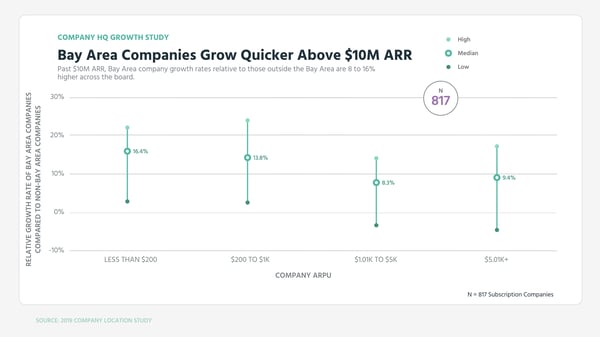 Yet, with the rise of costs, maybe slower growth is ok for longer term gains. I know that’s a bit of blasphemy, but the growth at all costs mindset is dissipating more and more as our markets mature in the favor of smarter growth and better retention. 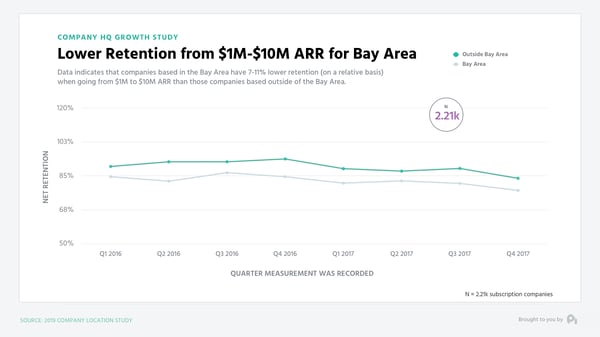 Admittedly, the gain isn’t a home run and could be attributed to a whole host of factors, but companies in the Bay Area typically have a culture of spend, spend, and spend, which is the job of a heavily funded company - deploy capital.

This spending can lead to poor unit economics and acquiring the wrong types of customers who then end up churning.

Ultimately, Silicon Valley is Silicon Valley for a reason. It’s our cradle of innovation, spurring almost all of the greatest hits in our industry. It’s certainly possible to build a successful company outside of the Bay Area and we’re seeing the rise of the rest, but until these other ecosystems have the necessary ingredients, the Bay Area will still continue to win out.